Supermarket chain Aldi has submitted a planning application to build a new food store in Goole.

Following a public consultation to establish if residents would be interested in the supermarket coming to the town, Aldi has now submitted plans to build the store on the land East of Doiran on Rawcliffe Road.

If given approval, the 9,997sq. m site, opposite B&Q, will see the development of a new food store as well as associated car parking and landscaping.

The public consultation exercise which involved newsletters being sent to 4,400 households in the locality, showed that 92 per cent of respondents were in support of the store coming to Goole and 3 per cent were undecided.

A spokesperson for Aldi said: “We are pleased with the positive support from the public consultation exercise and would like to thank those residents that took part.

“The new store will bring 30-40 new full and part time jobs as well as additional jobs at the construction stage.”

The application came before Goole Town Council during the full council meeting on Thursday, October 7 and councillors welcomed the plans but did also raise concerns about traffic management in the area.

Councillor Ross Turner said: “This application should be welcomed but there are concerns about the amount of traffic that will be turning on to Rawcliffe Road, not only from the Aldi store, but eventually from the Beal Homes development too. Traffic calming measures or a roundabout should be considered.”

He added: “For people travelling there on foot I also think there should be a crossing at the site to ensure people can cross safely.”

The application will now go to East Riding of Yorkshire Council.

Aldi has submitted a planning application to build a new food store in Goole. (14-10-87 SU) 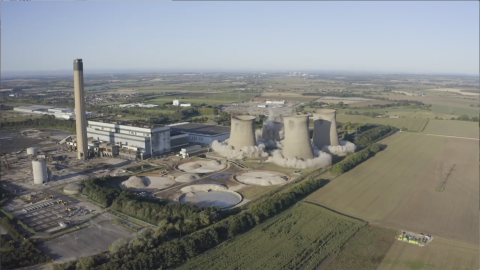 Cooling towers demolished
The second set of cooling towers at the former Eggborough Power Station have been demolished in the next “milestone” step towards redeveloping the site.
Goole News - Emily Collins

Dance school hotfoots it into final of charity challenge
Duet School of Dance has been selected as a finalist in the Viking FM Cash for Kids Sports Challenge.
Goole News -
Download the Goole Times Live app